I'd like to take this opportunity to respond to Edin's blog about what is stated in the CNET interview. As I mentioned in my response to Edin's blog entry, in the interview I never called out PHP 6 as a Zend product. I *did* talk about what's coming down the pipeline for PHP and mentioned that both Zend and Yahoo! have been contributing to the Unicode effort (which is true). One of my aims is to promote PHP proliferation and adoption, and talking about the support from organizations like Zend and Yahoo helps with that.

Zend is a commercial company working in the open source PHP community, as are Yahoo, IBM, Oracle and many others. There should not be an inherent conflict in that situation. We are very careful to acknowledge our relationship with the community – we point to the fact that there is such a large community of contributors to PHP as one of the key strengths of the technology (as can be seen in most of my presentations). We are also continually contributing significant Zend resources to the PHP community, working on PHP, Framework and the Eclipse IDE projects.

Edin’s blog in part builds on a pre-existing perception that Zend claims more credit for PHP than it deserves. I acknowledge that there have been some unfortunate statements in the past that may have contributed to that perception. But that was years ago, and we have become very sensitive to that. Zend did not invent PHP, does not own PHP, etc. That goes for Zeev and I and all other Zenders. When we introduce ourselves we say that we are leading contributors to PHP, and I think we can make that case.

It’s also important to understand that it is *not* in Zend’s interest to claim that we are the only company behind PHP, that would make PHP look much smaller than it is which would be very counter productive to our quest for increasing PHP proliferation.

I think Stephen Shankland’s coverage of PHP and Zend are very positive, most of what he wrote is accurate. He may not be aware of the sensitivities in the community and so he describes PHP 6 in a way that it sounds like a Zend product. I did not say it, but Stephen writes the article from handwritten notes from the interview most probably a few hours later, so it is easy to see how that happens.

We will continue to promote PHP, the community, the contributors to it, the corporate support for it, and so forth. We are committed to make the whole community stronger, and will give continue to give credit to its many contributors.
Posted by Andi Gutmans at 7/21/2006 11:11:00 AM 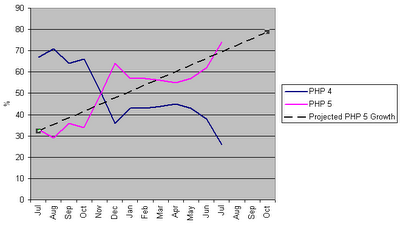 I was invited and spoke at the ACM SIGMOD conference in Chicago a couple of weeks ago. For those who aren't familiar with SIGMOD, it is ACM's Special Interest Group on Management of Data. The conference is probably the most important world-wide conference in this space where leading database researchers and developers meet to present their research papers.

It was therefore an honor and exciting to be given the opportunity of representing PHP as part of their industrial track. I gave a 25 minute presentation, focusing mainly on PHP's Web Services support and also talked about the XML Content Store work we're doing with IBM which is finding its way into the Zend Framework. The crowd was extremely well versed on XML and Web Services and I got some good questions.

As part of my track both BEA and Microsoft also presented some of their solutions. Erik Meijer from Microsoft presented a paper on LINQ which was very interesting. I've also posted my talk for those who are interested.

For lunch I caught up both with Hamid Pirahesh from IBM Research and with Erik Meijer. I had met Erik last about four years ago and I was surprised that I got somewhat the wrong impression of him back then. I had thought he was more of a purist language designer (e.g. C#/Java) but it was pretty cool to actually find out that he's a VB lover and that a lot of his thinking and the philosophy we followed when designing PHP are of similar nature. We both believe in ease-of-use and simplicity.

Hamid, Erik and I at lunch:

Now that dynamic languages are becoming first class citizens in the Enterprise, I believe we will be seeing more PHP coverage at such academic settings. Until next time...!
Posted by Andi Gutmans at 7/08/2006 04:39:00 PM

My previous blog entry regarding the Eudora to Outlook migration got some interest, so here are a few brief updates:

a) It's official. The MS Outlook import tool *really* sucks. Even if you first convert to Outlook Express, it just can't deal with a lot of the HTML emails and some customer Eudora tags. It left a lot of emails virtually unreadable. Thanks to an anonymous poster to my original blog entry, I found Aid4Mail which is commercial software that specializes in these imports. It worked MUCH better than the Outlook tools. It batch transferred all four years of email perfectly into Outlook. I just had to start it before going to sleep and in the morning it was done (remember this is over four years of email). Microsoft, you should consider licensing this technology! It's really in your benefit for such migrations to actually work.

b) As I mentioned in my previous posting, MS Outlook search sucks compared to Eudora. It was clear that I'd have to install one of the Desktop search products to get back some of the benefits of good search. I initially tried MSN Search as I thought it'd work best with MS Outlook. It was OK but it took too long to fire up after hitting enter on a search. So I installed Google Desktop Search and that works like a charm.

c) I mentioned that we use sanitizer at Zend which renames many attachments to attachment-xxxDEFANGED-doc. I hacked together a VBA script which went through all my years of email and renamed those attachments to be the correct original file name. I then also wrote a filter which would run on incoming messages and fix the attachment names. It's probably the worst code I've written but VBA is like PHP in that you don't have to know the language to use it :) You can find the filter at the following URL.
In order to use it, you should setup a Rule that filters incoming messages that have attachments. Also you need to create a directory c:\temp\attach which I use for temporary storage while extracting and reattaching attachments (Outlook doesn't support renaming attachments so you have to export and import them). Anyway, don't judge my coding skills by this code. It's pretty ugly and doesn't do any error checking. That said, it's been tested on a few hundred thousand messages and seems to be rock solid. It also logs what it does in C:\AttachmentFilter.txt. If you want the script that I used to bulk update all my emails, send me a note and I can send it to you. This code can be freely used for whatever purpose you wish.